Prime Minister Narendra Modi is set to launch the construction of the Ram temple in Ayodhya, 28 years after the demolition of Babri Masjid at the same spot. The bhoomi pujan event is scheduled to start at 12.45 p.m.

Mr. Modi and RSS chief Mohan Bhagwat will be among the five persons on stage at the bhoomi pujan ceremony for which over 170 guests have been invited by the Trust entrusted with the construction of the temple.

Here are the updates:

Samajwadi Party chief Akhilesh Yadav said that he hoped the future generations will follow the ‘maryada’ (dignity) of Lord Ram for the “welfare and peace” of all.

“I hope the present and future generations with true heart will follow ‘maryada’ (dignity) of Lord Ram for welfare and peace of all according to the path showed by Him,” the SP chief said. – PTI

Ahead of the foundation-stone laying ceremony of the Ram temple in Ayodhya, Prime Minister Narendra Modi on Wednesday offered prayers at the Hanumangarhi temple here.

Accompanied by Uttar Pradesh Chief Minister Yogi Adityanath, the PM arrived at the temple dressed in traditional dhoti-kurta. He was gifted a headgear by the chief priest of the temple. – PTI

PM Modi has arrived for the ground-breaking ceremony. Wearing traditional dhoti-kurta, the Prime Minister deboarded an Air Force helicopter which flew him here from Lucknow.

He was welcomed at the Saket helipad by Chief Minister Yogi Adityanath, among others, following which they visited the Hanumangarhi temple and offered prayers. Both the leaders were seen sporting white masks as a precautionary measure to control the spread of coronavirus.

PM Narendra Modi with UP CM Yogi Adityanath in Ayodhya on August 5, 2020.
| Photo Credit: Twitter/BJP UP

As the countdown to the construction of the Ram Temple in Ayodhya begins, eminent sculptor Ram Sutar and his son Anil Sutar are eager to get a green signal from the Uttar Pradesh government to give a final shape to the statue of Lord Ram which will be erected on the banks of Saryu river. 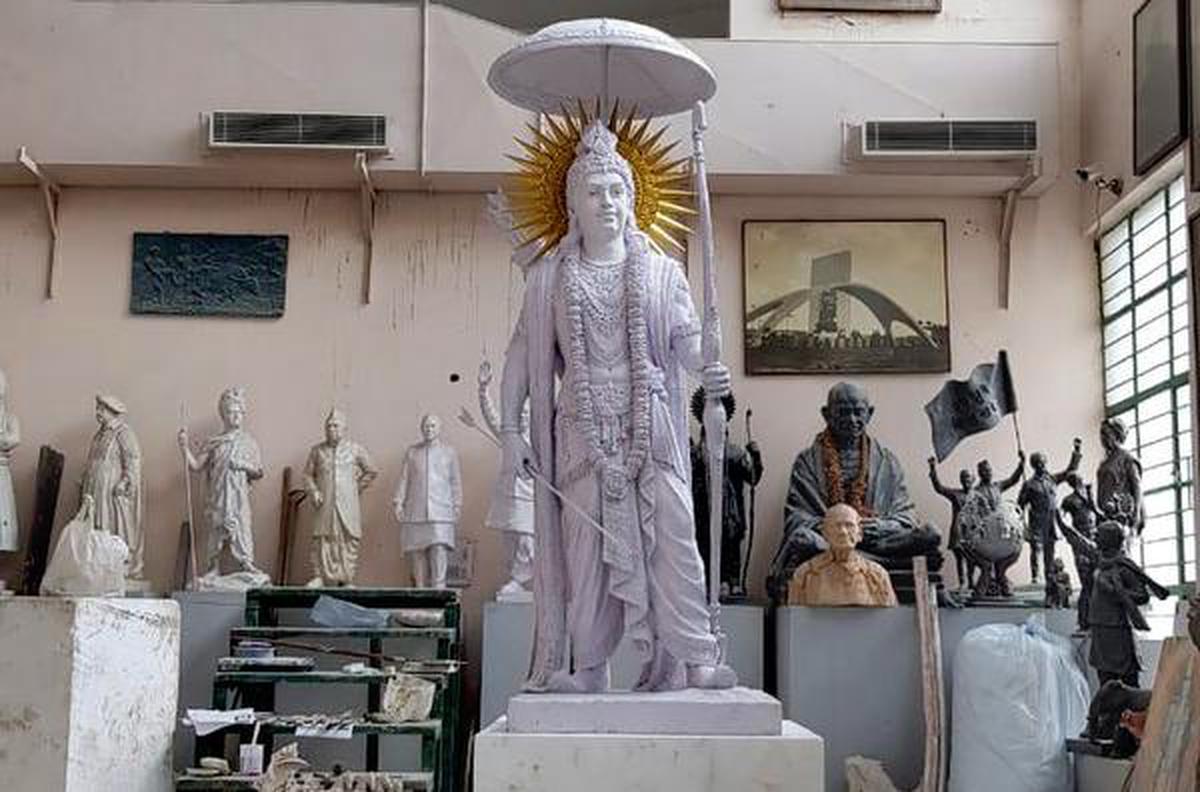 A replica of the statue at the workshop of the Sutars.

“In 2018, Chief Minister Yogi Adityanath had selected our specimen of the statue but after that, we haven’t heard from the officials,” said Mr. Anil, speaking for his 95-year-old father. At 251 metres, he said it is going to be the tallest statue in the world. “During our meeting, the CM said he wanted the statue to be totally indigenous and we promised him the same,” said Mr. Anil.

The Ram statue, he said, would be seen holding a bow in one hand and an arrow in another.

Over 170 invitees to witness the ceremony

As many as 175 guests, including 135 seers, are expected to attended the ground-breaking ceremony of the Ram temple. 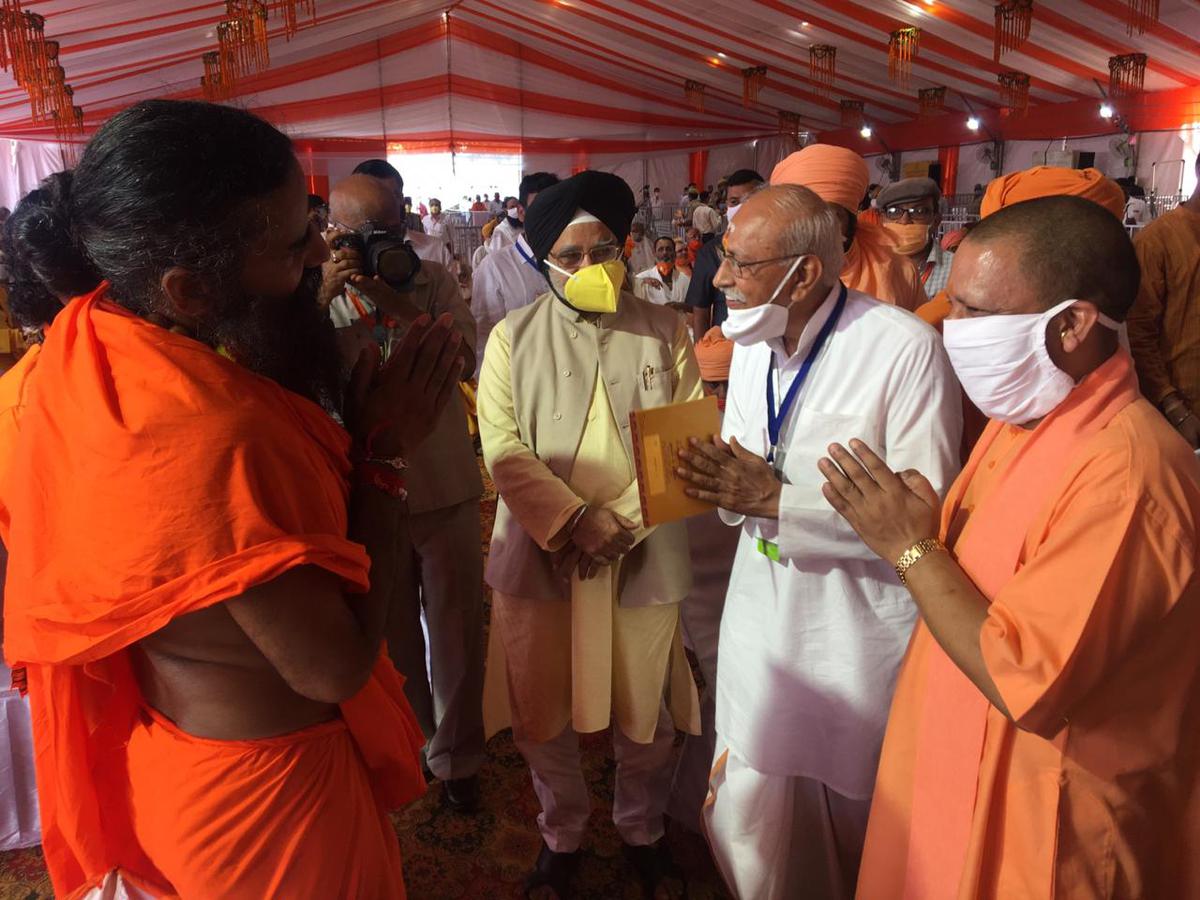 Two prominent Muslim names, Iqbal Ansari, the former litigant in the Babri Masjid case, and Mohammad Shareef, who was awarded the Padma Shri for years of performing last rites of unclaimed bodies, have also been invited. – Omar Rashid

Prior to the ground-breaking ceremony, Prime Minister Modi will take part in ‘pooja’ and ‘darshan’ at Hanumangarhi, a statement by the PMO said on Tuesday.

From Hanumangarhi, the PM will travel to ‘Shree Ram Janmabhoomi’ where he will take part in pooja and darshan of ‘Bhagwan Shree Ramlala Virajman’.

He will unveil a plaque to mark the laying of foundation stone and also release a commemorative postage stamp on the ‘Shree Ram Janmabhoomi Mandir’. – PTI

Prime Minister Narendra Modi on Wednesday morning left for Ayodhya where he will lay the foundation stone of Ram temple.

The Prime Minister’s Office shared a picture of Modi boarding an Air Force plane. He was dressed in traditional dhoti-kurta.

A helicopter would fly him to Ayodhya from Lucknow. – PTI

Watch | The road to the Ram Temple

A Constitution Bench led by Chief Justice of India Ranjan Gogoi on November 9 delivered its judgment in the Ramjanmabhoomi-Babri Masjid title dispute.

In a unanimous decision, the five-Judge Bench allotted the disputed land for the construction of a temple. The Sunni Waqf Board will be given five acres of alternative land in a suitable, prominent place in Ayodhya.

On the eve of the bhoomi poojan (ground breaking) ceremony for a Ram Temple in Ayodhya, former deputy Prime Minister L.K. Advani, considered one of main protagonists of the Ram temple movement, and whose invitation to the ceremony is still shrouded in confusion, released a statement terming the proposed temple as one that would usher in Ram Rajya in India and as a representation of a “strong, prosperous, peaceful and harmonious nation” with “justice for all and exclusion of none”.

Mr. Advani, who led a Rath Yatra drumming up mass support for the movement in the early 1990s and was arrested in Bihar subsequently, is considered one of the main architects of the movement, but will not be attending the ceremony in person on Wednesday. Aides were unclear whether he would be attending it via video conference.

Why language has been a sensitive matter?