“It was my way of protesting the gruesome crime,” says Neetu Chopra, the fiery 29-year-old event manager from Udaipur, about her #rideforrevolution. Her aim was to quell fear and motivate women to fearless, step out of their comfort zones and learn self-defence techniques.

True to the spirit of her campaign, she rode through the night from Madurai to Kanyakumari on NH 44 in the final leg of her expedition last weekend: she started from Ramban, 65 kilometres from Srinagar on December 15, riding 4,200 kilometers to reach Kanyakumari on January 3. “I did not feel any fear at all, and actually reached my destination 12 hours ahead of schedule,” she laughs.

The only break she took was at a tea kiosk at 2.30 am and posted a video of it on Instagram. The positive responses she received prompted her to drive an extra 400 kilometres to and around Thiruvananthapuram. “Kerala was not on my itinerary but I am happy I could show more people that if one woman gathers the courage to leave her home, she is equal to a 100 and proves that she is not just caring but also daring,” says Neetu.

Neetu decided to embark on the long distance solo journey because she feels holding placards and posters, sloganeering and candle light marches are all just symbolic and lead to nowhere. “Have they reduced crimes against women since the Nirbhaya case in Delhi in 2012?” she asks. “Nothing has changed and women in our country continue to be unsafe,” says Neetu and adds, “Only women can make the roads less dangerous for themselves by using public spaces more instead of getting cowered by fear and choosing to remain indoors.”

Her Ladkiyon bahar niklo (girls, step out) campaign on a two-wheeler was a shout-out to young girls and women. She met many of them en route, from motley crowds to large gatherings, and addressed pre-arranged and spontaneous meetings. “ I wanted to inspire confidence in women that it is okay to venture out even during odd hours,” says the bungee jumper and NCC gold medallist.

Neetu describes herself as the quintessential rebel fighting patriarchy in her home State, Rajasthan and within her community. Successfully completing the Kashmir-to-Kanyakumari (K2K) ride, she became the first Jain girl to achieve the feat – something that all bikers dream of.

She is happy that she undertook this ride — even though she decided about it on an impulse. “I was addressing college students in Jodhpur on December 2. The gangrape incident was fresh in everybody’s mind and I mentioned that girls needed to be out of their safe zones to conquer their fears of being unsafe. I told the audience I would like to ride alone on the highway on a scooty like ‘Disha’.” Mediapersons present on the occasion splashed it in the local papers. Neetu admits she was got a tad nervous initially not knowing how to go about it. Fortunately, Swaroop Roy of Royal Rider’s Club (RRC) read about her talk and enrolled her into the club. After that, things moved at jet speed. However, Neetu was shocked by the attitude of people while scouting for sponsors. “Many asked me who will do the household chores if women stayed out for days. Such comments made me more determined and #rideforrevolution was born.”

Neetu had never been on an expedition before, barring a fun ride she did with her friend on November 23. “We rode after midnight in search of chai and snacks on November 23. We were working on a project in Udaipur till late at night and needed a break,” she says. And the two girls ended up doing a carefree 265 kilometre ride on the Udaipur-Ahmedabad highway. “It gave us a strange sense of empowerment. We reached Ahmedabad at 5.30 am, had dhokla for breakfast and returned to Udaipur by noon next day.”

Her friends and family dubbed her crazy, but the adventure-spirited Neetu says she overcame her fears with that night’s spontaneous drive. “It worked as an immense boost for my Kashmir-to-Kanyakumari (K2K) expedition,” she says. 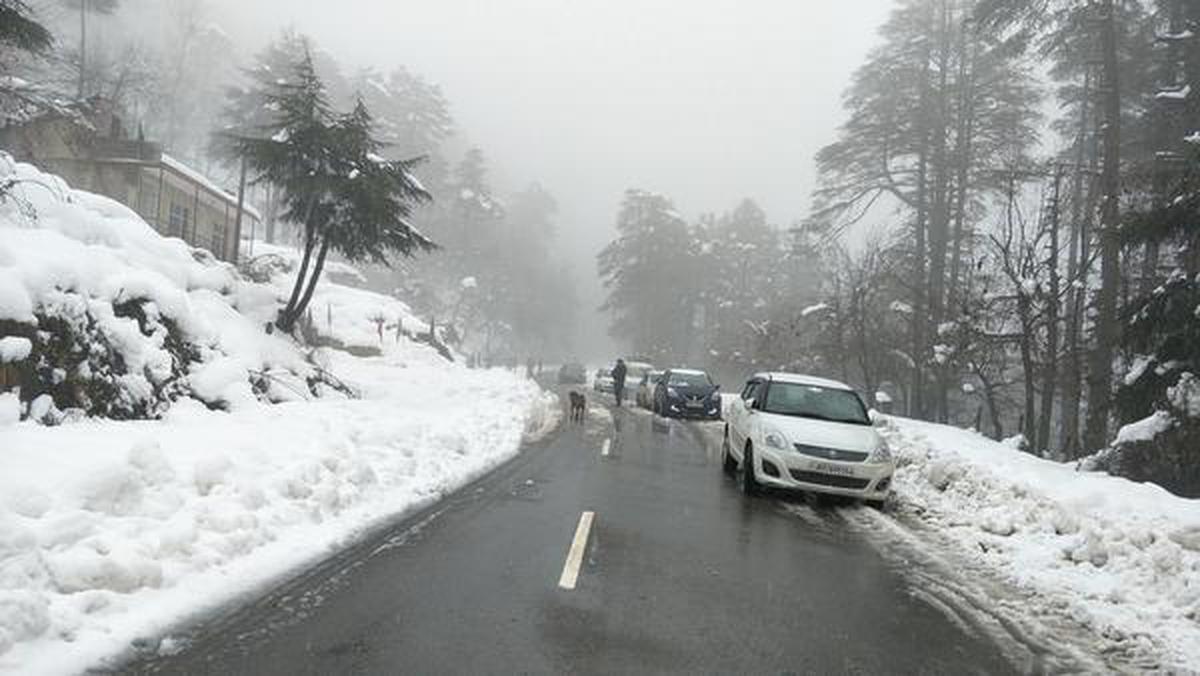 Neetu did a warm up ride of 2,700 kilometres from Jodhpur to Jammu from December 4 to 12 before kickstarting her K2K expedition. “The State was in the midst of a lockdown and internet black-out and I was warned about landslides. But with the assistance of four RRC bikers, I drove continuously on damaged roads for eight hours in rain and snowfall.”

She says her physical and mental strength helped her pull this off. Four sets of clothes, a knife, and a taser torch was all that she carried besides earning goodwill on the way.

Neetu returned to a rousing reception back home earlier this week and was awarded the Rajasthan Book of Records trophy. Her boldness has inspired many in her community to allow their girls to go on similar expeditions. “There is a request now to take 11 girls with me on my next ride,” says Neetu. At the moment, she is excited about the two rounds she has cleared for MTV Roadies Show. The final results will be out next week and you may see me on TV soon,” she smiles, adding, “But it is K2K solo ride that made me realise my power within.” 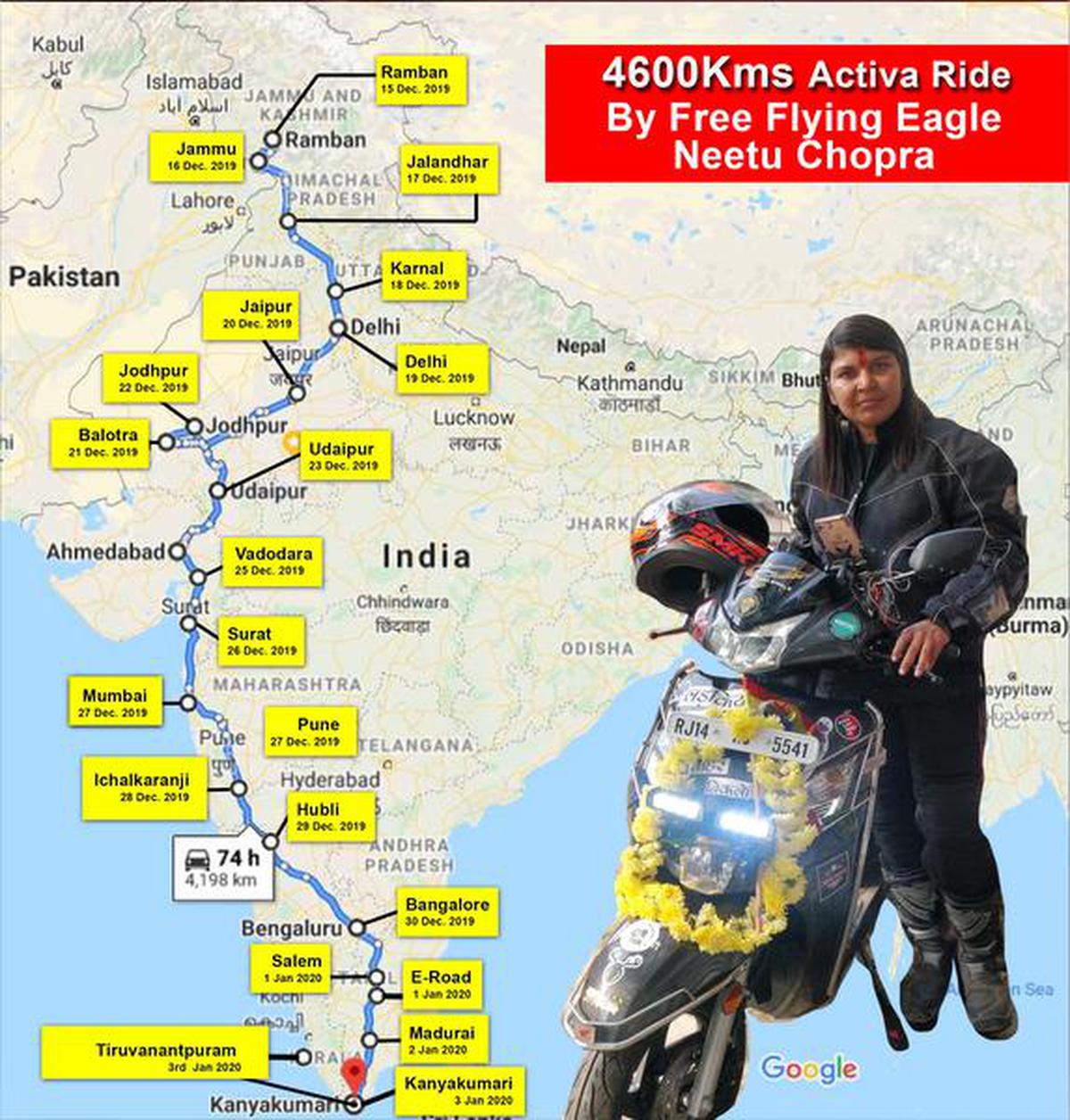 Added another 400 km by spontaneously riding to Thiruvananthapuram and around

Toughest stretch was Jammu to Ramban in -4 degrees C. It took eight hours to drive 140 km

Drove from Erode to Madurai to Kanyakumari without sleeping for 24 hours. Covered 450 km distance with breaks only to address groups of women on the way.

You have reached your limit for free articles this month.

Register to The Hindu for free and get unlimited access for 30 days.

Find mobile-friendly version of articles from the day’s newspaper in one easy-to-read list.

Enjoy reading as many articles as you wish without any limitations.

A select list of articles that match your interests and tastes.

Move smoothly between articles as our pages load instantly.

A one-stop-shop for seeing the latest updates, and managing your preferences.

We brief you on the latest and most important developments, three times a day.

Not convinced? Know why you should pay for news.

*Our Digital Subscription plans do not currently include the e-paper ,crossword, iPhone, iPad mobile applications and print. Our plans enhance your reading experience.

How to use the balance board to improve stability